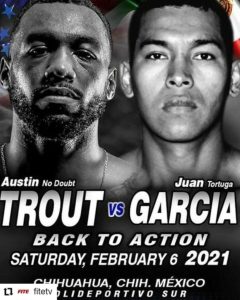 A year after his last fight former world champion Austin “No Doubt” Trout (32-5-1, 18 KO’s) will be back in the squared circle south of the border.

February 6th in Chihuahua, Mexico, the Las Cruces native will square off with Zamora, Michoacan, Mexico’s Juan “Tortuga” Armando Garcia. Last February the former WBA champion scored a 2nd round TKO of Rosbel Montoya inside the friendly confines of the Inn of the Mountain Gods Resort & Casino in Ruidoso NM. It was Trout’s first win since a 2018 unanimous decision over Juan De Angel.

Garcia (21-7-2, 12 KO’s) has been a pro since 2012. During his pro tenure, the 33-year has had four & five fight win streaks.  “Tortuga” has won two of his last three fights but has not competed since losing by TKO to Jessie Wilcox in June of 2018. The Mexican fighter has increased his power as his career has gone along with nine of his last eleven wins by knockout.