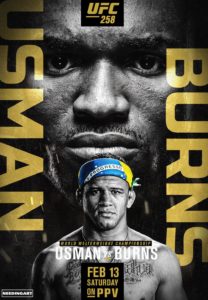 The day before Valentines the UFC will reunite former teammates as Gilbert Burns will challenge Kamaru Usman for the UFC welterweight championship.

Fingers should be crossed that the third time is the charm. The fight was booked for the first time in July but Burns tested positive for Covid-19. Usman remained on the UFC 251 card winning a dominate decision over BMF champion, Jorge Masvidal. The Usman-Burns fight was set a second time for December, but nagging injuries forced Usman to withdraw. This third bout is set to headlined UFC 258 on February 13th.

Usman was submitted in the second fight of his pro career. He’s currently on a 15-fight win streak that includes taking the welterweight title from Tyron Woodley & two successful defenses. Burns is on a six-fight win streak, including being 4-0 at 170 lbs. Burns jumped into title contention by knocking out Demian Maia in March & beating Tyron Woodley by decision in May.