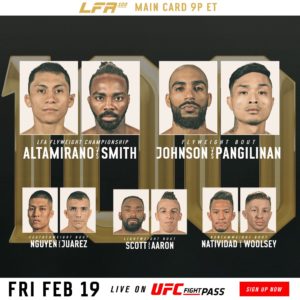 The originally announced main event for LFA 100 had Victor Altamirano facing Carlos Mota. On six-days’ notice Nate Smith accepted the replacement opportunity. Altamirano has the most wins in LFA history with all eight of his pro wins having happened in the LFA octagon. Smith is a Contender Series alum whose scored finishes in his last four wins.

Maria Henderson against Amanda Mitchell started the card off.  Henderson found her range early finding a home for her right hand after working her way up from the body. Down on the cards Amanda Mitchell put Henderson on the fence and land kicks to the body, but the comeback was not enough to overcome the slow start.

An imposing wrestling game saw Emmanuela Moliere come out with a dominate first round nearly catching Amber Danielson-Smith in a rear naked choke. Daielson-Smith would keep the fight on the feet in round two peppering Moliere with her jab-cross combinations. Moliere would take the fight back to the ground in the third spending the round between monut and having Danieklson-Smith’s back, en route to the decision win.

The first fight of the main card saw Christian Natividad facing Evan Woolsey. Came out wing big hooks, but unlike his first two pro opponent Woolsey didn’t fall. Natividad switch up his tacktics and went to his wrestling skills. A takedown each round saw Woolsey unable to get back to his feet on his own. As Natividad scored his first pro win by decision.

From spinning back kicks to knees in the clinch Tommy Araon came out applying pressure and threw the kitchen sink at Gerald Scott. As the fight wore on Scott was continually on his back foot. After two round on the feet, Aaron took Scoot to the ground advanced to mount and cut Scott open from elbows. Scott in a deperate attemot to escape gave his back allowing Aaron the space to find a fight finishing rear nacked choke.

The knockout of the night came from Fortis MMA’s Steven Nguyen. Nquyen quickly stuffed a Jorge Juarez takedown. Nquyen hit Juarez with a check left hook, put out his jab and a follow up right cross scores the walk off knockout in just thirty seconds.

A furious first round between Charles Johnson & Karlee Pangilinan saw the two exchange brutal teeps and thunderous low kicks. The striking battle continued into the second round. Pangilinan found a home for his right hand. Knocking Johnson to his but. Johnson right back to his feet fired back. Knocking Pangilinan to his but. Pangilinan shot in on a takedown to switch Johnson was able to sink in an anaconda choke to force the tap.

The main event would go all five rounds. Victor Altamirano set the tone early applying pressure and unleashing a brogue of left kicks. Taking the fight on six-days’ notice Nate Smith unfortunately missed weight. Even though the Chicago native gave it his all looking for the knockout out with every swing. Altamirano countering with stinging straight punches piercing through the Smith defense. A high caliber wrestler Smith would get his takedowns but the active guard of Altamirano would nullify Smith’s positive work. As the fight went on the Altamirano attack to the legs and mid-section chipping away at Smith’s gas tank. The championship rounds would see Altamirano showcase his footwork, speed, and his grappling prowess. Victor Altamirano has gone from being on the amateur card at LFA 1 to closing out LFA 100 with the flyweight title getting wrapped around his waist.