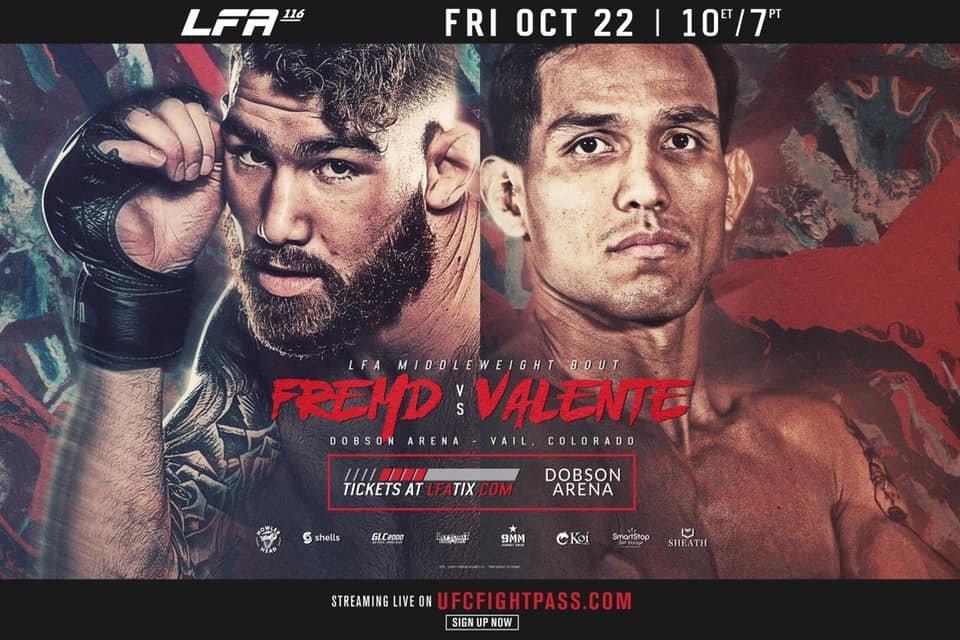 Colorado is a frequent destination for LFA and this will be the promotions third trip to the resorts town. This time around the card is headlined by a middleweight showdown between Colorado trained fighter Josh Fremd & Brazil’s Renato Valente.

Fremd made his LFA debut with the momentum of consecutive wins in his back pocket and stopped Larmar Gosey in under 90 seconds. Just a few weeks later the Pennsylvania native scored another win knocking out Antonio Jones at LAF 93 to earn a spot in the promotion’s middleweight title tournament. In semifinals the Factory X fighter won his third straight by first knockout defeating Bruno Oliveira. Fremd is once again on a mission to get back to a title fight.

Brazil’s Valente came to the LFA with the experience of having fought for top Russian organization ACB & Bellator MMA. The 29-year-old is a dangerous grappler with four of his seven wins by rear naked choke. “Indio” rebound from a promotional debut loss at LFA 110 taking a decision win from Contender Series vet Chibwikem Onyenegecha.

In the co-main event Michael Stack takes his 80% finishing rate into battling Brazil’s Jackson Filho who returns to action for the first time since LFA 90. Judo expert and Contender Series alum Pauline Macias who’s unbeaten in three fights in the LFA will take on unbeaten Marnic “The Sawed-off Savage” Mann who has 100% finishing rate. Undefeated fighters battle as Jalin “The Gentelman” Fuller and his 80% finishing rate returns to the LFA for the fourth time to face Ryan Charlebois who’s 2-0 in the LFA. Coming off season 29 of The Ultimate Fighter, unbeaten Dan “The Determined” Argueta squares off with Hawaiian striker “Hot Rod” Rodney Mondala.

Listen to “Ep 115: UFC & Bellator Are Back This Weekend, Khabib Wants to Be Like Dana, Diego Sanchez Health Update and More” on Spreaker.