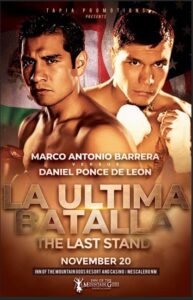 gends retuning to the ring has become a trend recently. Tapia Promotions is getting in on the action with “The Last Stand”.

November 20th at Inn of the Mountain Gods, Marco Antonio Barrera (67-7) will face Daniel Ponce De Leon (45-7) in a six round affair to headline an eight-fight extravaganva.  Barrera a former three weight-class world champion is returning to the ring over a decade after his farewell fight. Ponce De Leon a two-time world champion will put the gloves back on after seven years.

Unbeaten Abel Mendoza (30-0) who’s won ABF & WBC titles will take on Antonio Escalente (29-11), who has 20 of his 29 wins by knockout. Coming off a July knockout win at Inn of the Mountain Gods, Josh “Pitbull” Torres (23-7-2) will square off with Steven Villablobos (15-1), who’s rebound from his lone professional loss with four wins in a row.

The undercard will see a super-heavyweight fight between Cody Beck & Johnathon Rice who are both making their pro debuts. Plus opponents are still being secured for Clinton Chavez, Javier Fernandez, Angel Chavez, & Angel Jimenez.