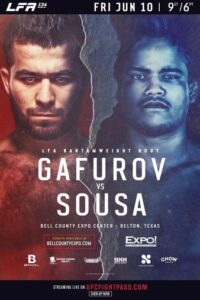 A bantamweight showdown of global proportions has been announced to headline LFA‘s return to the lone star state.

LFA 134 will be the promotion La 22nd event in Texas and it will take place at the Bell County Expo Center in Belton Texas.

The main event will see Tajikistan’s top prospect Muin Gafyrov up against Brazil’s Herberth Sousa. Gafyrov is a two-time Combat Sambo Champion who’s also fought for One championship. The 26-year-old looks to get back to his wedding ways coming off of a controversial decision loss on the Contender Series. Sousa is BJJ black belt who fought for such promotions as Shooto, Jungle Fights and Future FC while coming on the Brazilian national scene. Sousa impresses many when he made his U.S. debut at CFFC 81 defeating Bantamweight champion Alexander Keshtov, but didn’t win the title after missing weight.

Further on down the card in welterweight action Oklahoma top prospects Jared McLoughlin will face streaking Texan Julius “The Boom” Holmes. McLoughlin has won four in a row. Three have been finishes in the first round. Holmes has rebound from losing his first two professional fights to win six in a row. The last two have been second round submissions of Clinton Williams & Chris Pecero.