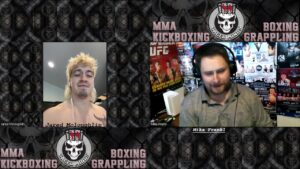 Mika Frankl talks to Jared Mcloughlin ahead of his LFA 134 fight with short notice opponent Shane Sobnosky. The Oklahoma native talks about how spending eight months in New Zealand improved his skills & reassured his confidence. Jared also shares how big of influence Brogan Anderson has been on his career. On a four-fight win streak Mcloughlin also addresses coming out of his shell and announcing his presence in the sport. And he makes clear his intentions for his performance at LFA 134.