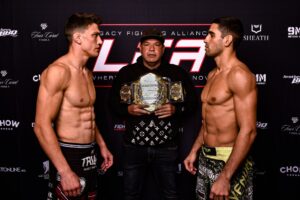 LFA 133 takes place at the Mangess Arena at the University of Denver in Denver Colorado. The 13 fight card as headline by battle for the vacant LFA featherweight championship.

The main event will see top American prospect Michael Stack against top Brazilian prospect Jose Delano but only stack can win the championship belt. An unfortunate scene at the weigh-ins saw three fighters miss weight. The most Costly era came from Jose Delano who missed weight by 5 pounds making himself in eligible to win the LFA title.

Luis Gurule & Cody Jerabek also both missed weight. Jerabek by 1.6 lbs. and Gurule by. .6 of a lb.. All three competitors will forfeit a promotion of their purses to their opponents. All three fight will proceed.

Stack is on a three fight win streak jumped started by knocking out Jordan Mapa. Following decision wins over Jackson Fialho & Caio Gregorio, Stack has positioned himself to be the 6th LFA Featherweight champion. Delano is on a nine-fight win streak but has missed weight for both for his fights in the LFA. Delano moved from the main card opener to the main event of LFA 126 after Rafael Barbosa was forced to withdraw. Pulling off a major upset win Jose Bilharinho at LFA 126 gave Delano this second chance at a title fight.