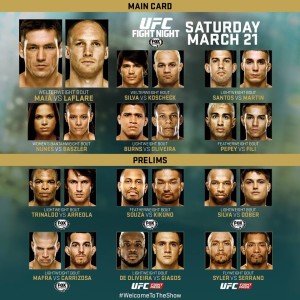 The Ultimate Fighting Championships are in Rio De  Janeiro, Brazil, this weekend  for UFC Fight Night 62; a 12 bout card headlined by one of the worlds finest grapplers and former Middleweight Title contender Demian Maia squaring off against undefeated, New Yorker, Ryan LaFlare.

Recap- Serrano has Syler on the defense most of the fight worrying about the takedown. Seeano was landing the overhand right all fight. Serrano changed up to the right uppercut and bomb the lights go out for Syler, a 1 punch knockout

Recap- Giagos scored the takedown, moved to mount, Oliveira tired to scramble. Giagos took the back and sunk in the RNC.

Recap- Carrizosa scored a knock down in the first off a straight right hand. After that Mafra walked forward landed more volume and the harder shots plus collecting takedowns 5 throughout the contest and mounting Carrizosa several times.

Recap- A back and forth striking battle in the first round that saw Dober stalked and backed Silva to the cage several times. Silva showed nice head movement and a long job. Silva with a jab drew blood from Dober’s nose. In the 2nd Dober took Silva down. Silva locked up a guillotine choke, Dober defended slid to half guard and as he was trying to break Silva’s hands apart, while still conscious and moving his arms the ref stops the fight saying that Dober tapped. (This is a horrible call and awful way for the fight to end. Not saying Dober would have won the fight, but he was nowhere near taping. The ref took a bad position and made a ridiculous call. Dober was tho robbed by the ref of the opportunity to win.)

Recap- Souza stayed long faints the left and fires a straight right that catches Kikuno as he goes to level change. The strike lands squarely and we have a one punch knockout.

Recap- Trinaldo spent the majority of the bout on top in guard landing punches. Trinaldo even cracked Arreola three time in the final frame with over hands, but his credit a tired Arreola gased through the 3rd round would survive till the final bell.

Recap- Pepey would get aggressive coming forward. They clinch, Fili would put Pepey on the cage and Pepey jumped into a flying triangle choke. Fili would slam Pepey into the mat but Pepey adjusted and committed to the choke. After about 2 minutes of trying to escape Fili was forced to tap.

Recap- Burns scored a take down early in the first, but Oliveira got back to his feet and went on the offensive with a long jab and following up with hooks in combination. IN the 2nd round Burns is showing visible damage to his left eye. In round 3 Burns rushed out the gate clinched, body lock, take-down to mount. From mount Burns in a blink sinks in an omplata. Oliveira escapes putting Burns back in mount. Burns then goes for a mounted triangle, that gets blocked and Burns transitions to the armbar and gets the tap to complete the comeback.

Recap- Nunes right away showed off a speed advantage. Nunes hurt Baszler first with a teap kick to the gut then a left hook and straight right. Baszler then ate several more big punches and leg kicks to the knee. Before dropping from a vicious outside left kick to the knee that looked to injure Baszler’s knee. Baszler immediately dropped to her knees, Nunes followed with a few punches before the ref stepped in.

Recap- Feeling out process. Santos starts to rev up the offense with leg kicks and fainting the jab. Martin takes a page from his opponent and is working the low kicks. Martin is putting together the better combinations in the 2nd. Santos takes the fight to the ground, with a foot sweap from the clinch and takes the back sinks in the rear naked choke and forces the tap.

Recap- An exchange of take-down attempts. Koschek clinches put Silva on the cage. They reset in the center. Silva lands a right Koscheck dives for take-down, Silva sprawls, puts Koscheck on his back. Koscheck dives under stands. Silva ducks a head kicks and lands a straight left backing Koscheck up. Koscjeck circles away resets. Koscheck comes forward winging right hands, Koscheck slips, Silva lands a left jab then big right hook, follows with a right to the body. Koscheck shoots for the take-down and Silva locks up a guillotine choke pulls guard and gets the tap.

Recap- For 4 rounds Maia put LaFlare on his back with double leg takedowns. LaFlare to his credit fought off several deep arm-triangle chokes. In the 5th Maia was exhausted and tried pulling guard and even dropped to his back several times out of the blue. Maia was even deducted a point for stalling in the finale frame.