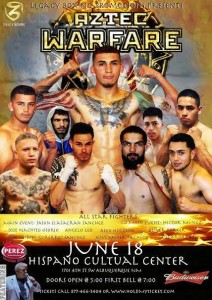 Recap: Two big flurries from Holguin each one has a hard right land for a knock down after the 2nd one the ref called it.

Recap: many big flurries with Vasquez getting the better with power hooks.

Recap: the 1st saw Young frustrating Sanchez with his length. Sanchez found his agression and scored knockdowns in the 2nd & 3rd.

Recap: All fight Osorio moved forward following his jab up with sting hooks to the body.  In the later rounds Osorio  started to added straight right to the head an body. McIntre fought in small sports and accepted taking flurries against the ropes.

Recap: Rd 1 was all about the pressure from Munoz. The 2nd saw Garza land more but still get cornered an ate combinations. 3rd saw Garza land the hard shots but Munoz landed more often and kept Garza along the ropes. 4th Rd left hook in the corner drops Garza. A 2nd came from a flurry from Munoz. Jabs from Munoz, Garza takes another knee. Garza goes down for the 2nd time this Rd with a right hook to the year. Ref finally stops the beating.

Recap: 1st Rd was all about the Sanchez pressure and combinations. Chacon  landed more in the 2nd but was one an done. sanchez kept up the pressure . Rd 3 Sanchez with a big right had chacon on the run and caused a cut over the Chacon right eyebrow. Rd 4 right hand from Sanchez scores a knockdown. Rd 5 Sanchez with a stiff jab pushing Chacon back. Rd 6 Sanchez with pressure, Chacon sliding along the ropes, Sanchez throwing and landing hard left hooks to the body.