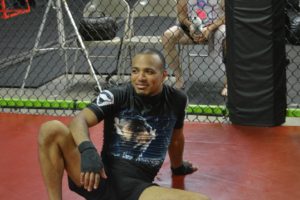 A pair of Flyweights meeting at Bantamweight has been added to the UFC’s 25th anniversary event.

Espinosa Has won 4th straight, the most recent, a 3rd round TKO over Riley Dutro, which earned “Chino” his UFC contract on Dana Whites Tuesday Night Contender Series.  Espinosa has 9 of his 13 wins by stoppage, with 7 by submission. The 28 year old, who wrestled for West Mesa high school in Albuquerque, has a vast submission game, his most lethal the Darce choke.

De La Rosa went 9-0 earning his way into the UFC. But was handed his first loss as a pro in his octagon debut, getting submitted by Tim Elliot. “The Bubblebee” got back in the win column at UFC Fight Night 133, picking up his 6th win by submission, forcing Elias Garcia to tap from a rear naked choke..