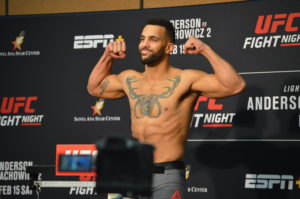 The first weekend of May will see the UFC roll into the home of the Thunder. The card has grown to eight bouts with Devin Clark vs. Alonzo Menifield and two featherweight bouts being added to the card.

Clark is a former RFA champion, who’s won two of his last three fights. In June of 2011 the “Brown Bear” defeated Darko Stosic by unanimous decision. Following a setback in October, Clark got back in the win column at UFC on ESPN+ 25, beating Dequan Townsend by unanimous decision. Meniffield has finishes in all his victories. The Fortis MMA product is 2-0 in the UFC with first two wins over Vinicius Moreira & Paul Craig.