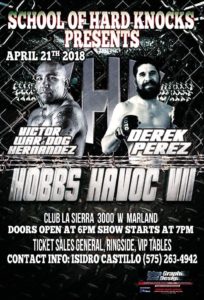 After a year an a half absence MMA action returns to Hobbs, NM, as School of Hard Knocks Presents Havoc in Hobbs, April 21, at Club La Sierra.

The main event is in place with Hobbs’s own Victor “War Dog” Hernandez (6-16) squaring off with Belen’s Derek “Rage” Perez. Hernandez fights out of Genesis MMA & School of Hard Knocks, while Perez one of the coaches at Perez Fighting Systems, competes in MMA (2-7) & Boxing (1-8). Hernandez has all his win by stoppage, 5 of the 6 by submission. Perez a fast started, who loves to bring the action and get into a brawl has scored both his pro wins by submission.