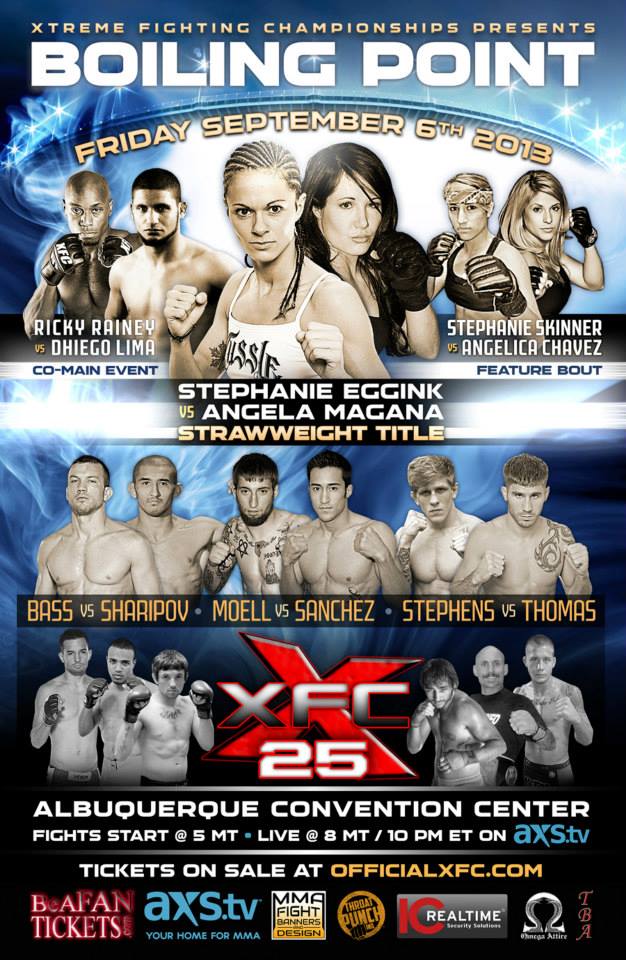 CagedMinds.com is live at XF 25: Boiling point with round by round reacp and result as Xtreme Fighting Championships has made their first trip west for XFC 25: Boiling Point, which is taking place/took placxe on Friday September 6, at the Albuquerque Convention Center in New Mexico. The main card ofor this event is televised on AXS TV at 8:00 PM MT. The main event will see the 1st ever Women’s XFC Strawweight champion crowned when Stephanie Eggink battles Angela Magana.

Rd 1- Marin starts off agressivley with the strikes land a few lon Jabs. Manrique under a punch forces Marin to the fence and completes a takedown. Manrique on top is doing work with ground and pound from inside the guard. Manrique advance his position to side control and is dropping down elbows. Manrique traps an arm and has the curfix position. Marin with an explosion of energy sweeps and gets back to his feet. Manrique lands another takedown just before the ropund ends.

Rd 2- Manrique again starts off as the adgre3ssor with a leg kick, then closes  the distance and locks up a body lock. Marin pulls guard looking for a Guillotine choke. Manrique escapes the choke and is abel work to side control, the round ends there with a few elbows landed.

Rd 3- Marin more assertive is walking down Manrique with strikes, until Manrique get to the clinch and from the fence lands a high crotch take down. Manrique is again able to pass to side control. Manrique landing strikes from side control get over aggressive and finds himself back in Marin’s guard as the round and fight ends.

Rd 1- Sosa comes out throws a low leg kick slip jumps back to his feet. Espinosa shots for the take down Sosa sprawls looks for a front choke, Espinosa compeltes the take down in a scramble Espinosa locks up a north-south choke and the tap comes.

Result- Jordan Espinosa def. Tim Sosa by submission (north-south choke) at 1:36of round 1

Rd 1- Tomasellie comes out looking like he will touch gloves but instead throws a front kick. Tomasellie muscles Montoya to the cage and after landing heavy leather to the body pulls guard. Montoya starts landing from the top. The ref goes to stand up the two fighters and Tomasellie is wobbling causing the ref to stop the fight.

Result- Joshua Montoya def. Edward Tomasellie by TKO (ref stoppage) at 1:47 of round 1

Rd 1- Sanchez makes out throwing a few faints and Moell dives on a single leg. Against the cage both men battle for position. A flurry of strikes both men land. They go into clinch range Sanchez lands a few knees to back off Moell. Moell again looks for the takedown but can’t find it. As Sanchez tries to esacape from Moell follow tries to take Sanchez’s back. They end up on the ground and Sanchez gets back to his feet. Moell trying for a take down is clipped by Sanchez.. Following Moell to the ground Sanchez is relentless with the punches till the ref stops the action.

Rd 1- Reese right away comes out with a flying knee then changes levels for a faild takedown. Vannata lands a left jab and follows it with a right upper cut stunning Reese. Reesew shoots again and is met with the uppercut putting Reese to the ground Vanntana follows, but Reese works back to his feet. Reese from a clinch trips Vannata. Reese tries to take the back as Vannata is scrambling. Vannata scrambles gets on top and then stands. Reese is relentless back on the take down completing this one and against the cage taking Vannata’s back looking for a choke as the round ends.

Rd 2- They start off in the center of the cage exchanging hooks. After Vannate lands a solid right, Reese is again in take down mood. Reese successful on the take down is now on Vannata’s Back. With hand fighting and wrist control Vannata gets back to his feet. Reese again is right on the take down and has Vannata’s back. Vannata fights back to his feet. Reese shoots and is met with a knee and scrambles to again take Vannata’s back. Vannata again fights his way out. Vannata walks down Reese with the jab as the round ends.

Rd 3- Vannata comes out walking forward landing a front kick. Reese ducks under a big right hand and runs past Vannata. Reese in on a body lock drops for a takedown that Vannata dead leg his way out of. Vannata jumps in with a left and Reese clinches. They break apart and Reese lands a jab. Vannata land a left right combination, Reese is circling away and looks hurt. The action stops so Reese can pick up his fall out mouth peace. Vannata lands a quick switch kick. Big leg kick from Vannata sends Reese stumbling. Reese spends the final 30 seconds of the round running from Vannata and we go to the judges.

Rd 1- France state off with leg kicks. Thomas shoot in for a double leg and after some work on the cage completes the takedown. Thomas in France guard has France’s hand stuck behind his back. France works his hand free, but still has Thomas on top landing strikes. Thomas  has caused a cut on the forehead of France. Thomas stands and then looks to get back on top but is met with an up kick. A scamble breaks out and Thomas is on his back with France’s arm stuck in a strange triangle position. The action is stopped for the cage doc to look at the cut on France’s head. Action restarts with France landing a kick leg to which Thomas answers with a hard left hook as the round ends.

Rd 2- France starts off the round again landing kicks. Thomas presses forward eating a punch. Against the cage Thomas grabs the Muay Thia clinch and is blast away with knees while France is throwing punches to the body and shoulders. France changes level and completes a take down right into a Triangle choke. Thomas tells the ref that France is asleep and he is.

Result- Ryan Thomas def. Rocky France by submission (triangle choke) at 1:27 of round 2

Rd-1 Both men start off slow swinging and missing on single strike attacks. Bass presses Sharipov to the fence. After some positional battling they break apart. Sharipov throws and misses with a punch lands a glancing kick to the body changes level for the takedown but is stuffed. Sharipov again uses his hands to set up the takedown and is successful this time. Bass back up to his feet separates from Sharipov. Bass presses Sharipov to the fence and they again break. The round ends in a scramble with both men looking for the take down.

Rd2- Bass comes out pressing forward with strikes and after 2 connections is put on his back by Sharipov. Bass kicks Sharipov away and is back to his feet. Sharipov is using an uppercut to cover distance. After landing an uppercut Sharipov changes levels and completes  the take down. Bass flips his way away from Sharipov. On the feet now they meet in the center of the cage. Sharipov lands a quick right that drops Bass, Sharipov follows to the ground and is punching Bass, Bass gives his back and Sharipov poundsw out Bass fro the stoppage.

Result- Frank Sharipov def. Stephen Bass by TKO (strikes) at 4:19 of round 2

Rd1 –Lima starts off with a wild low leg kick.  Lima takes the center of the cage and this time land with the low leg kick. Lima sneaks two lefts through the guard of Rainey. Rainey lands a kick and Lima clinches pressing Rainey against the fence looking to the single leg, Lima changes up the attack to a double leg. Rainey is defending well and turns putting Lima on the cage a knee from Rainey goes low and the ref stops the action. Action start back up. Rainey moving forward lands a kick and opens up with the hands the defense of Lima holds up as most the punches are deflected. Lima shoots in lands a big takedown against the cage. Rainey pops right back to his feet. Rainey has Lima against the cage in the clinch as the round ends.

Rd 2- Rainey takes center cage and throws a high kick that misses. Lima answers with a straight right. Rainey Shoots in for the takedown but Lima defends. Rainey tries again moving forward with strikes, but when he changes levels the take down is defended. Lima presses forward determined to get a take down but Rainey defends.  The two men change positions against the fence a few times until Lima scores the takedown. Rainey pops right back to his feet and Lima again scores the take down in a scramble Lime dives on a rear naked choke the sub is not there and Rainey turns to be on top. Rainey stands and is met with a Lima up kick. Round ends seconds later.

Rd 3- Lima with the pressure get the body lock and forces Rainey to the cage. Rainey defends. Lima and Rainey exchange jabs. For a 3 punch combination Rainey Has Lima cornered, than Lima circles away. Lima lands an over hand right on the jaw of Rainey. Rainey shots in for the take down Lima defends against the cage. As the break and move toward the center of the cage Rainey score a quick take down. Lima turns his back and get back to standing. Lima presses forward with strikes and after a few connections Rainey scores a takedown as the round and fight ends.

Rd 1-  Magana is first to take the center of the cage. A Magana leg kick is the first strike to land. Eggink is pressing forward with punches but only finding air. Magana is lands two more leg kick then a push kick. Eggink throws akick, Magana catches it tries to sweep out the back leg but Eggink keeps her balance. Magana lands with a jumping in right hand. Eggink is starting to find a home for the jab as the round ends.

Rd 2- Eggink lands first this round with a left hook. Magana lands a right to the chin and clinches. Eggink tries to scramble, but Magana controls and is on top in guard. Eggink on the ground is trying to wrap up Magana and force a stand up. Magana opens up with ground and pound to which Eggink locks up a triangle choke. Eggink throws crazy punches with the submission locked in. Eggink abandoning the strikes pulls Magana’s head and forces the tap .

Result- Stephanie Eggink def. Angela Magana by submission (triangle choke) at 3:10 of round 2