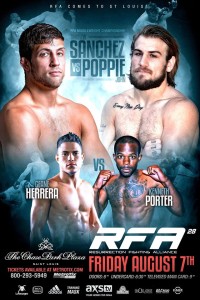 The RAF will be at the Chase Park Plaza in St. Louis, Missouri, on August 7th for RFA 28; headlined by Andrew “El Dirte” Sanchez & John Poppie battling for the vacant RFA Middleweight title.

Sanchez was a highly successful collegiate wrestler before transitioning to MMA. Sanchez scored a pair of TKO wins over Todd Meredith and Miles Marshall, before suffering a knock out loss to Kevin Casey. At RFA 26 Sanchez rebounded with a 2nd round TKO of Clinton Williams.

Poppie will be making his RFA debut on a 4 fight win streak, having submitted Brandon Rossbach, TKO’ed Will Dicke, and Joe Fonoti; and most recently decision-ed Rakim Cleveland.

In the co-main event undefeated Geane “La Pulga” Herrera faces Ken “The Sensation” Porter, who’s on a 4 fight win streak. Herrera and Porter combine for 12 stoppage wins with 10 by submission.

At 145 lbs. Bobby “The Wolfman” Moffett winner of 3 in a row collides with Nick LoBosco, who’s coming off submitting Michael Hardiman with a guillotine choke.

In a Heavyweight clash Curtis “Dirty Curty” Blaydes, who has all his wins by TKO, meets Bellator vet Justin “The Grizzly Bear” Frazier, who has 6 of 7 wins by knock out.