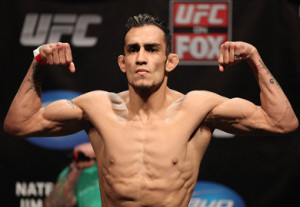 Once again, now for the third time, the UFC has scheduled Tony Ferguson vs Khabib Nurmagomedov, but this time the undisputed Lightweight Title is in the mix.

It’s expected that Conor McGregor who has not defended the Lightweight Title since winning it in November of 2016, will be stripped of the title for lack of activity and showing no signs of wanting to get back in the octagon.

Currently the interim Lightweight Champion, Tony Ferguson (23-3) won season 13 of TUF, and is on a 10 fight win streak. Ferguson has a lengthy frame and possesses lethal elbows, wrestled in college and has a black belt in the 10th planet system of BJJ.

Dagestan’s Nurmagomedov (24-0) and 9-0 inside the octagon. A Judo black belt and master of Sambo, Nurmagomedov pushes a incredible pace and is relentless with his takedowns. His control an ground and pound are at elite status.