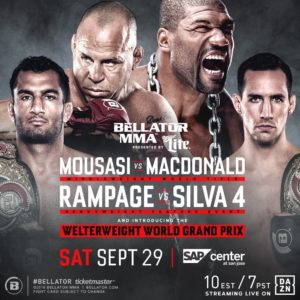 Bellator MMA held A press conference in New York to confirm some rumors and throw a curve-ball eliminating tape delays, but not in the way you’d think from the Viacom owned entity.

The event will also see the launch of Bellator’s partnership with Dazn, as the services first exclusive event. Dazn is a sports streaming service, where you’d watch the NFL Sunday Ticket, if your in Canada. The service will be the sole place to watch 7 yearly Bellator events and you’ll also be able to simulcast the 15 yearly Paramount Bellator MMA events. This service will gave the fan the ability to watch overseas Bellator events, eliminating tape delays. The service will not be available in the US until September 29 and currently doesn’t have a set price point.