Don’t stop if you heard this before, a title fight is headlining UFC 230, but maybe not the one your thinking of. 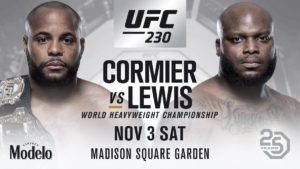 In quite the surprising announcement UFC 230 will see a Heavyweight title fight as number 2 ranked contender Derrick Lewis is going to challenge the champ-champ Daniel Cormier. Surprising cause following his come from behind, 3rd round knock out win over Alexander Volkov this past Saturday at UFC 229, said he didn’t have the cardio for a title fight. Also on last weeks UFC Tonight Daniel Cormier, who won his 2nd UFC title in July by knocking out Stipe Miocic, stated a hand injury was keeping him out of competition and that he was focused on a future fight with Brock Lesnar. A lot changed in a few days. November 3, MSG UFC Heavyweight title bout. 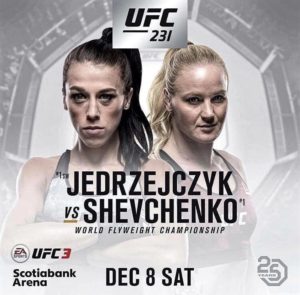 The fight for the vacant UFC Women’s Flyweight Title, between Valentina Shevchenko & Sijara Eubanks that had been announced as the UFC 230 main event is off. Valentina Shevchenko has been moved back to facing former Strawwight champion Joanna Jedrzejczyk for the vacant 125 title. That fight will be the co-main event of UFC 231. Eubank who’s left on the outside of the title picture will remain on the UFC 230 card squaring off with Roxanne Moddafferi. It’s not all additions for UFC 230 as due to injury, Dustin Poirier will not be fighting Nate Diaz. No word yet on if Diaz will remain on the card. No official reason was given for the changes that took place with regard to the women’s Flyweight Title bout.

Daniel Cormier has committed to Heavyweight with the announced match-up at UFC 230 and making his intentions to face either Stipe Miocic or Brock Lesnar afterwards , known on social media. The UFC is going to strip Cormier of the Light Heavyweight title. The vacant Light Heavyweight title will be up for grabs at UFC 232, December 29, in Las Vegas, we’ll see a rematch between  Alexander Gustafsson & the returning former champion Jon Jones.