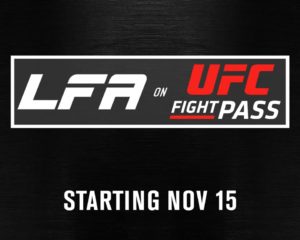 The news came during the UFC Fight Pass portion of the UFC 244 prelims.

LFA is the product of the merger between Legacy Fighting Championship (LFA) & Resurrection Fighting Alliance (RFA). From the promotions first event LFA 1 all the way to LFA 76 their events where broadcasted on AXS TV. That all changed in September when Anthem Sports & Entertainment purchased the controlling majority of AXS TV. Days after the acquisition news came that LFA 76 would be the last Mixed Martial Arts event AXS TV.

As scheduled LFA would hold LFA 77 at the Mystic Lake Casino with no broadcasting or streaming of the Event.  Following LFA 77 the promotion would postpone LFA 78 & LFA 79 until a new distribution deal could be reached.

The deal between LFA & UFC Fight Pass starts with LFA 78 at the Bell County Expo Center in Belton, TX on November 15th. LFA 79 has also been rescheduled for November 22nd at the 1stBank Center in Broomfield, Col.