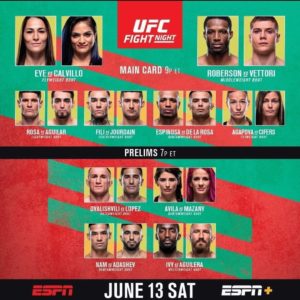 It took less then a minute for Christian Aguilera to dispatch of Anthony Ivy, landing a big right hand and unloading them till the fight was called. Tyson Nam make Zarrukh Adashev pay for missing weight, countering a low kick with a overhand right; for a one punch knockout. Julia Avila is now on a four-fight win streak after overwhelming Gina Mazany  in under thirty seconds, a knee to the body took Mazany’s wind. Avila swarmed punching to the finish. The first fight to go the distance saw Merab Dvalishvili put up a relentless offensive effort including 13 takedowns of Gustavo Lopez. Mariya Agapova was all offense in her octagon debut, landing a head kick right on the jaw, taking Hannah Cifers back sinking in the rear naked choke pulling Cifers to the ground for the tap. Sniping from the outside and violently stuffing all Mark De La Rosa’s takedowns with elbows, Jordan Espinosa picked up his second UFC win by decision. A plus 13 advantage in landed strikes and five takedowns saw Andre Fili edge out Charles Jourdain on the score cards. In a razor close all striking affair Charles Rosa edged Kevin Aguilar. As advertised the co-main event brought fireworks. Marvin Vettori out scrambled Karl Roberson to the top position, dropping ground and pounding leading to giving his back and Vettori finishing the fight by rear naked choke. Cynthia Calvillo makes a successful debut moving up to flyweight defeating Jessica Eye by unanimous decision on the strength on four takedowns and over seven minutes of ground control.