The first Boxing event in New Mexico of 2019 will be presented by Holmes Boxing at the Buffalo Thunder Resort & Casino, featuring former WBC title holder, Fidel “The Atrisco Kid” Maldonado Jr.
The 8-round main event will see Fidel Maldonado Jr. against Luis Gerardo Avila. Maldonado Jr. is a heavy-handed southpaw with 19 of his 24 victories by knockout. As his career has went on the 27-year-old has fought at his best as a technician. “The Atrisco Kid” has won his last 5 fights in his home state. Avila, also 27, hails from Los Cabos, Baja California, Mexico, and has 75% of his win by knock out. The local Boxing fans will remember, this past September, Avila took a split decision win over Antonio Martinez at Buffalo Thunder.

Unbeaten Loretto Oilvas, knocked out Jake McClain in his pro debut. Followed it up with a decision win over Ernesto Salvidrez. The Santa Fe fighter will now look to go 3-0 when he faces Albuquerque, NM, Andre Galarza, who bettered Daniel Flores-Garcia by split decision at Legacy Boxing Promotion’s, September event, Aztec Warfare II.

Opening the card will be a rematch from last year’s Cold War 4, as Albuquerque, NM, Jordanne “OMG” Garcia & El Paso, TX, Karina Mendoza look to finish what last time was scored a draw. 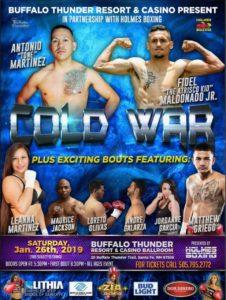 Listen to “Ep 115: UFC & Bellator Are Back This Weekend, Khabib Wants to Be Like Dana, Diego Sanchez Health Update and More” on Spreaker.