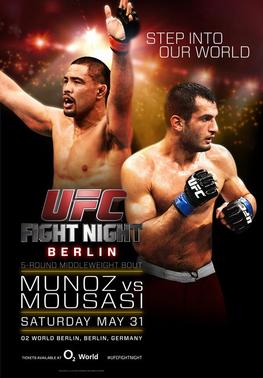 For the 1st time in almost 4 years the UFC is in Germany, at the O2 world in Berlin. This is moving night in the Middleweight division, as the top 3 match-up feature the 185 lbs. division.

How I saw it- Magomedov owned the 1st 3 minutes of round one with his striking before clinching against the cage and eating a knee to his face and spent the rest of the round on his back. Pesta would try but couldn’t get the fight back to the ground past round 1. Pesta did show a great chin surviving head kicks and various big punches.

How I saw it- Blanco run out his corner blast Ogel in the face with a flying switch kick. Blanco stayed aggressive but Ogle recovered, got back to his feet and landed so own licks. 2nd RD stared the same way with Blancon landing a big kick and knee. From the knee Ogle scored a take-down, scrambled to the back and went in search of a choke.The 3rd RD was all Blanco striking with accuracy not power and a great jab.

How I saw it- Sobotta in round 1 used a kicking arsenal, and from there with timely take-downs won all 3 round.

How I saw it- Lee comes forward Alcantara lands and over hand left and finishes the bout with ground and pound.

How I saw it- Jotko pushed forward first but Cedenblad with a trip from the body lock took it to the ground winning the first round. The 2nd was more of a scramble fest with changing of top control. Whiole trying to wall-walk Jotko was sucked into a deep guillotine choke and forced to submit.

How I saw it-  A big left hook from Hein opens a cut above Dober’s red eye early in RD 1. A power of throws and Hein easily finds a first round grove. Dober mounts a comeback int eh 2nd with low kicks and angling off after combinations, but Hein clinches and from the body lock throws Dober, who does sweep and ends the round on top. Dober bleeding a lot in the 3rd ddi everything he could to pressure and push the pace but the counters of Hein landed more often, clearer, and with more effectiveness.

How I saw it-  Both fighters were trying to get the bout to the mat. Backsrtom cracks Niinmaki with a stepping in knee right to the jaw, Niinmaki tried to shoot a single leg but with  body positioned on the side Backstrom used his very long arms to sink in a rear naked choke for the tap.

How I saw it-  Strickland circled, Barnatt stalked after. 1st RD Strickland’s head and feet movement looked to frustrate Barnatt who would find better range and land at a higher clip in the 2nd, but Strickland did score a take-down. The 3rd was close but Barnatt moved forward and landed more often in a very close technical striking battle.

How I saw it- Early on Cramont lit up Dolloway with body kicks, a huge swing in moment cam when Dolloway knocked-down Carmont with a left hook. Carmont got back to his feet after a defended take down against the cage, Carmont then score a double leg in more space, Dolloway would sweep and take back control. Rd 2 Carmont went back to the kick body then legs, Carmont’s hip fake seem to be keeping Dolloway from attempting take-downs. After exchanging leg kicks Dolloway changed level and put Carmont on his back for the majority of the rest of the round. Dolloway with a deeper gas tank took down and wore out Carmont in the final frame.

How I saw it- Munoz telegraphs the take down gets in deep and completes a huge slam; Mousasi pops right back up. They clinch Munoz goes for the Thia clinch and Mousais lights up the body with strikes. Munoz drives for a take-down, Mousasi goes for a choke Munoz role to his back to defend. Mousasi mounts and Munoz comes out the back door , Mousasi working his strikes while sprawled and tries to get the back for a choke. Munoz’s defends gets back in on a body lock and as he drops for the take down Mousasi moves to mount; Munoz gives up his back and this time the choke tight.