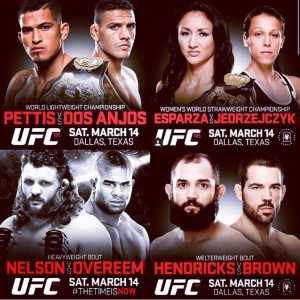 As I write this, UFC 185 has announced 8 bouts with 2 titles on the line. March 14th at the American Airlines Center in Dallas, Texas; UFC 185 will take place.

The Co-Main Event will see the first UFC Woman’s Strawweight title defense as Poland’s Joanna Jedrzejczyk (8-0) challenges TUF 20 winner Carla “Cookie Monster” Esparza (10-2) for the gold. In her last 3 bout Jedrzejczyk has scored a Knock out of Rois Sexton and in the octagon has won decisions over Juliana de Lima and Claudia Gadelha. Team Oyama’s “Cookie Monster” has won 4 in a row. Esparza is known for her double dangerous ground game as a relentless wrestler and having 4 submission wins, including submitting Rose Namajunas to be the 1st ever UFC Woman’s Strawwewight World Champion.

In what could be a Welterweight number one contenders bout former title holder Johny “Bigg Rigg” Hendricks (16-3) faces Matt “The Immortal” Brown (19-12). Hendricks thought he was on the way to completing a trilogy with Robbie Lawler, the current champion. But Lawler has asked for a break and Hendricks wants to stay busy. So in steps Matt Brown who was awaiting an opponent after injury scraped his February 14th fight with Tarec Saffideine. Hendricks has won 7 of his last 9 with the 2 losses coming in controversial decisions to George St. Pierre and Robbie Lawler. Brown is coming off a unanimous decision loss to Robbie Lawler, which ended a 7 fight win streak that saw Brown score 6 wins by (T)KO.

In a Heavyweight collision former multiple time world champion Alistair Overeem (38-14) meets TUF 10 winner Roy “Big Country” Nelson (20-10). Overeem came into UFC with a lot of momentum and the title in his sites. But in 6 trips to the octagon Overeem is 3-3 and has served a suspension for elevated testosterone levels. Maybe the ship has been set right for Overeem coming off a 1st round knock out of Stefan Struve. Nelson will also be looking to right his ship as “Big Country” has lost 3 of his last 4, coming off being knocked out fro the first time by Mark Hunt at UFC Fight Night Hunt vs. Nelson. Nelson’s last win was one of the most spectacular knock outs of 2013 stopping Antonio Rodrigo Nogueira in Brazil. Nelson and Overeem combine for 29 knock outs.

At Lightweight England’s Ross “The Real Deal” Pearson (16-8-0,1 nc) faces Canada’s Sam “Hands of Stone” Stout (20-10-1). Pearson the TUF 9 winner who spends most of his time training with Alliance MMA will be looking to bounce back from a TKO loss to Al Iaquinta. Stout a 17 fight UFC vet is also looking to rebound from a KO loss to KJ Noons. Pearson and Stout have a combined for 21 stoppage wins out of 36 total victories.

Fighting at Flyweight for the first time in the UFC Sergio “The Phenom” Pettis (12-1) clashes with Texas native Ryan Benoit (7-3). So far as a Bantamweight in the UFC Pettis went 3-1 with decision wins over Will Campuzano, Yaotzin Meza, and Matt Hobar. Benoit will be retuning to action after mission all of 2014. In his lone UFC bout Benoit a talented striker was taken to the ground and submitted by Josh Sampo.

After failing to make weight for Flyweight (125 lbs.)at UFC 177 Henry Cejudo (7-0) was told he had to move to Bantamweight (135 ls.) and did so successfully scoring a unanimous decision win over Dustin Kimura at UFC on Fox 13. After the win Cejudo requested the opportunity to against try to make Flyweight. Welcoming Cejudo back to 125 lbs. will be former title challenger Chris Cariaso (17-6) who is coming off a UFC 178 submission loss to champion Demetrious Johnson. Prior to the loss Cariaso has won 3 fights in a row over Iliard Santos (TKO), Danny Martinez (UD), and Louis Smolka (SD).

At Middleweight TUF Nations winner Elias “The Spartan” Theodorou (10-0) takes on Roger “The Silverback” Narvaez (7-1). Theodorou won the TUF Nations finale with a TKO of Sheldon Westcott and has followed that with a UFC Fight Night MacDonald vs. Saffiedine, unanimous decision win over Bruno Santos. After taking an on short notice fight at Light Heavyweight vs. Patrick Cummins, that ended in a TKO loss. Narvaez then moved back to 185 lbs. and pulled out a split decision win over Luke Barnatt.