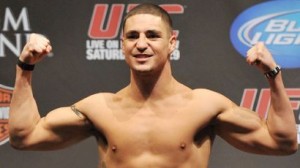 The original Ultimate Fight Diego Sanchez (25-7) is officially going to fight in his 4th different weight class inside the octagon, with news of his newly announced fight against UFC number 4 ranked Featherweight Ricardo Lamas (15-4) at UFC Fight Night 79.

Sanchez won season won of TUF as a Middleweight, then dropped to Welterweight, but found his most success at Lightweight earning a World title shot against BJ Penn at UFC 107. Sanchez bounced back an forth from Welterweight to Lightweight, with his last 4 fight happening at 155 lbs; Sanchez last fought in June of 2013 taking a controversial split decision win over Ross Pearson.

Lamas won 4 straight to earn a title shot at Jose Aldo at UFC 169, but faild to capture the title losing a unanimous decision. Lamas rebounded with a decision win over Aldo’s teammate Haran Dias. The momentum continued to build again for “The Bully” submitting Dennis Bermudez at UFC 180. Lamas would next square off with fellow perennial contender Chad Mendes, who would finish Lamas in under 3 minutes.

UFC Fight Night 79 is November 21st at the Monterrey Arena in Monterrey, Mexico ; and is headlined by Nate Marqudart vs. Kelvin Gastelum.