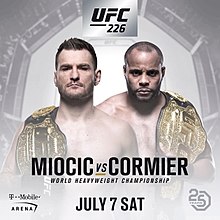 It’s no secrete that the UFC wants to put on big memorable fight cards for International Fight Week each July and the last 2 years have failed to live up to the hype. For International Fight Week 2018, the UFC has made one of the biggest Super Fights possible as Light Heavyweight champion Daniel Cormier will challenge Stipe Miocic for the UFC Heavyweight title in the main event of UFC 226.

UFC 226 is set for Saturday July 7th at the T-Mobile Arena in Las Vegas, Nevada. Furthermore Cormier & Miocic will be coaches on season 27 of The Ultimate Fighter.

In 2012, Cormier (20-1) as a replacement won the Strikeforce Heavyweight Grand Prix and he spent the first 12 fights of his career in the land of the giants. In the co-main event of UFC 220, Cormier won his 5th straight and defended the Light Heavyweight title successfully for the 3rd time, with a TKO of Volkan Oezdemir.

Miocic (18-2) has won 6 straight, 5 by knock out, 4 in the first round. In the main event of UFC 220 Miocic successfully defend the Heavyweight for a 3rd title, defeating Francis Ngannou by unanimous decision. Miocic has 14 finishes, all knock outs and 9 have end in the first round.

Cormier is an elite level wrestler with superb control. The AKA product is well versed in BJJ and has power in his underrated striking. Miocic is a elite athlete having won Golden Gloves as an amateur Boxer, and competed in both baseball an wrestling in college. Both also have day jobs Cormier with Fox Sports 1 and Miocic a fire fighter.