The card for Southwest MMA Series XXIX in its current state has 11-fights, 3 of which are in the professional ranks.

The first announced bout will see the pro debut of, Santa Fe’s own, Josiah Reyes who takes on, JacksonWink product, Jesse “The Tornado” Tafoya. Reyes, who went 4-1 as an amateur, trains out of several gyms; Santa Fe Fitness and Martial Arts, Superior Fitness, Santa Fe Athletic Co, & Luttrell/Yee MMA. Tafoya picked up his first professional win back in December of 2018, like most of his amateur victories this one came by submission.

When asked about his thoughts on making his pro debut Reyes said, “I’m excited to start this new part of the fight journey. So far, it’s been a beautiful ride with the best people. I’m a true fan of the sport and martial arts and feel privileged to be a part of it.”

Tafoya says, “I really like how I match-up against Josiah and I think it will prove to be an exciting fight.” 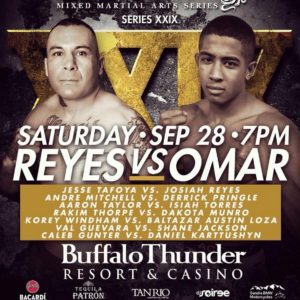 “I am thrilled to get to compete and test myself against another fighter with more experience than myself. We will put on a show but I’m looking to finish!”, said Jalin Fuller about the upcoming fight.

“I think it’s going to be a tough fight, but I feel like I have more cage time and been way more active”, said Kemoy Anderson about facing Fuller.

Also, on the pro side of the card Ali “The Silent Assassin” Omar looks to build off a July submission victory when he faces tough brawler Joe Reyes.

The card is expected to continue growing. Current card below.