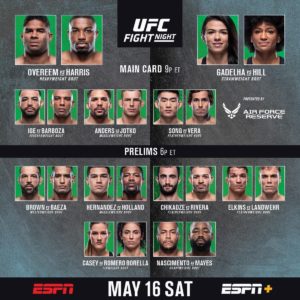 UFC on ESPN 8 is the third event in a week to take place at the Vystar Veterans Memorial Arena in Jacksonville, Florida. The 11-fight card is headlined by a top ten heavyweight match-up between, former kickboxing & MMA champion, Alistair Overeem against Walt Harris who has all his wins by knockout.

Rodrigo Nasimento got the card going by making a successful UFC debut. The Brazilian stunned Mayes with a head kick closed the distance taking the fight to the ground, taking Mayes back finding the fight ending submission. Cortney Casey looked great in her first fight at flyweight after getting taken down by Mara Romero Borella.  Casey of her back secures her forth professional submission win and first by armbar. Nate Landwehr picked up his first victory inside the octagon, leaving veteran Darren Elkinsa with a crimson mask after their 15 minuet war. An accidental headbutt cut Elkins inside of his right eye, a step in elbow slicing opened a gash across his forehead and a punch opening up a cut around the left eye. Giga Chikadze won his fifth in a row out striking Irwin Rivera. Rivera took the fight Thursday night replacing Mike Davis. After Davis had to go to the hospital for non-Covid-19 issues and was deemed medically unfit to compete. Chikadze showcased excellent counter striking and powerful kicks.  Kevin Holland made short work of Anthony Hernandez. Stunning Hernandez with with an elbow from inside the clinch. Following up with two knees to the body leaving Hernandez on the ground. Holland swarms with punches for the finish. After surviving a wild round one where both fighters where hurt badly.. Miguel Baeza remains unbeaten knocking out, veteran Matt Brown with a left hook in the second round.

Song Yadong & Marlon Vera opened up the main card with a fight of the year candidate. The Yadong power punches would garner the judges favor in the first two rounds, for the unanimous decision win. Krzysztof Jotko shut down the Eryk Anders take down attempts and double up his foe his the strike count to win his third fight in a row. Dan Ige won a 6th in a row pulling out a split decision win with a late takedown, battling back from being knocked down in the first round. Spoiling the 145lbs. debut of Edson Barboza.  In the co-main event Claudia Gadelha took Angela Hill to the ground. Hill came back in the 2nd round scoring a knock down off aright hand. The third round both fighters land clean shot, Gadelha got a bit of control time against the cage and edged out he split decision. IN the main event Walt Harris  came out quick dropping Overeem with a left hand but was unable to find the finish. Overeem capitalized off a Harris slip from a missed kick to control the rest of the round with his grappling. In the 2nd round an Overeem right high kick followed by a left hook knocks Harris to the ground. Overeem would back mount Harris and 50 unanswered strikes later the ref jumps in.