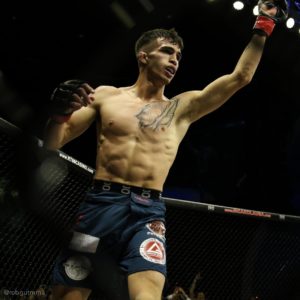 A late addition to next weekends UFC Fight Night “Covington vs. Woodley” will see the short notice debut of Jerome “The Renegade” Rivera.

Rivera (10-2) a native of Santa Fe, NM will take on Hawaii’s Tyson Nam on the prelim portion of the card.  Rivera is an LFA vet, on a three-fight win streak. The second fight on the first episode of this seasons Dana Whites Contender’s Series saw Rivera earn a unanimous decision win over Luis Rodriguez. The 25-year-old is a protege of Bellator vet Josh Montoya and trains at Luttrell/Yee MMA in Albuquerque. Rivera has found the finish in seven of his ten wins, all seven have come by submission.

Nam (19-11-1) was scheduled to face Matt Schnell at UFC Fight Night “Waterson vs. Hill” but a rough weight cut saw Schnell hospitalized and the fight cancelled. Three months ago, at UFC Fight Night “Eye vs. Calvillo” Nam knocked out Zarrukh Adashev in only 32 seconds. A huge puncher, Nam has four of his last five wins by knockout and has 11 career knockout wins.

Rivera joins his teammate Jordan Espinosa on the card. UFC Fight Night “Covington vs. Woodley” is September 19th at the UFC Apex in Las Vegas, Nevada.