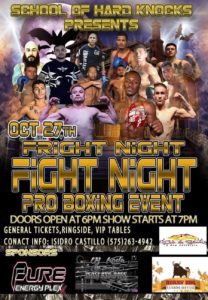 The main event will see Odessa, TXs, Desmond Hill against Hereford, TX, Omar Acosta. Both men mix it up in ring & the cage. Back in February, Hill knocked out Joe Reyes in Hobbs & in July of 2017 Acosta scored a TKO of Israel Huerta.

In the co-main event also with mma experience Chicago, Illinois’s, Maurice “The Hulk” Jackson, who scored a TKO win over Mark Jimenez in his boxing debut takes on the debuting Gabriel Rodriguez from El Paso, TX.

In a re-match from Legcay Promotions Route to Glory, Belen’s Gene “The Kid” Perez locks up with Jose Prado from Hobbs, the first a razor thin decision going in favor of Prado.

Ricky Reyes from Hobbs locks up with Levi Lucero from Albuquerque as both hunt for their first pro wiins. The same goes for Luis A Santos-Rodriguez from Hobbs against Michael Peterson from Clovis.

It all gets started with a grudge match between Belen’s, NM, Derek “Rage” Perez & Herford, TX, Paco Castillo; don’t blink.