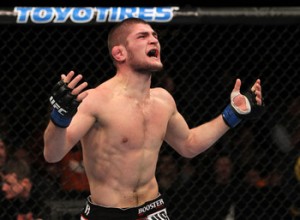 The UFC has announced lightweight champion “The Eagle” Khabib Nurmagomendov will put his title on the line against Tony “El Cucuy” Ferguson.

The bout will be the main event of UFC 249, April 18th at the Barclays Center in Brooklyn, NY.

The bout has almost felt destined to not happen after falling through four times . In 2015 the first booking was scrapped by a Nurmagomedov rib injury. In 2016, Ferguson was the injured party. In 2017 a rough weight-cut hospitalized Nurmagomedov. In 2018 a freak knee injury forced Ferguson to vacate the  interim lightweight title days before their  scheduled meeting at UFC 223.

Nurmagomedov (28-0) defeated Al Iaquinta at UFC 223 to win the vacant UFC lightweight belt. “The Eagle” would soar into Las Vegas at UFC 229 and submitt Conor McGregor. The champ defended his title for a second time submitting Dustin Poitier at UFC 242.