Bellator 246 “Archuleta vs. Mix” will be the promotions final event televised on the Paramount Network.

In 2019, Viacom which owns both Bellator MMA & the Paramount Network, once again merged with CBS after the two companies parted ways in 2005. As had been rumored Bellator will now have their main cards live on CBS Sports Network. Prelims will be available at CBSsports.com and on the Bellator Youtube page.

The first event on CBS Sports Network will be Thursday, October 1st, Bellator 247 in Milan, Italy. The main event will see slugger Paul “Semtex” Daley against San Diego, California’s “The Barbaric” Derek Anderson.  The main card is set for a start time of 4 p.m. ET in the U.S.

Ten days later, Saturday October 10th Bellator 248 takes place in Paris, France. The first major MMA promotion to hold in event in France since the sport was recently legalized in the country. The main event is a rematch, France’s Cheick Kongo faces Timothy Johnson, who he beat in 68 second at Bellator 208.  Kongo is unbeaten in his last eight, while Johnson has consecutive first round finishes. The co-main event will see knockout artist Michael Page against unbeaten, Cage Warriors champion Ross Houston. Main card will be televised live at 11:30 a.m. ET in the U.S. 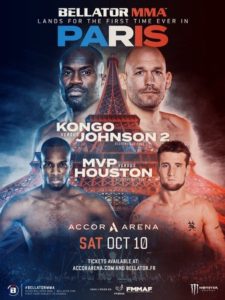 Thursday October 15th Bellator 249 at the Mohegan Sun Arena in Uncasville, Connecticut, will be the promotions prime-time debut on CBS Sports Network as Cris “Cyborg” defends the Bellator Women’s featherweight title against Arlene Belcowe, who is on a three-fight win streak.