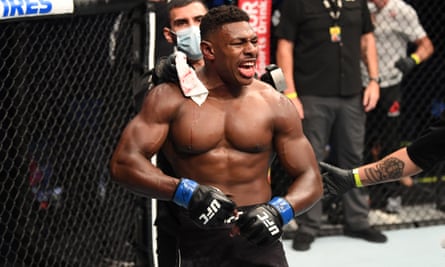 Coming off one of the most memorable knockouts in UFC History Joaquin Buckley has been booked for a quick turnaround.

The fighter nicknamed “New Mansa” will square off with unbeaten Jordan “The Beverly Hills Ninja” Wright in just over 5 weeks at UFC 255.

Unless you have been living under a rock, you know Saturday night Impa Kasanganay caught a Joaquin Buckley kick, to which Buckley reacted by planting the opposite foot square on Kasanganay’s jaw courtesy of a spinning back kick. Kasanganay was out before his body hit the ground. Many will never forget their first UFC win, when it comes in a fashion where the result is one of the biggest knockouts off all time, you put yourself on the map. Buckley has always been known for his striking ability with eight of his eleven wins by way of knockout.

Jordan Wright knows a thing or two about making an impression with a spin kick. In his UFC debut the first strike Jordan Wright threw, landed. It was a spinning heel kick off the top of Isaac Villanueva’s head. Knees from the clinch would cause a fight ending cut over Villanueva’s right eye.  Wright has 100% finishing rate with six knockouts & five submissions.